Munich is the capital of Bavaria and third largest city in Germany. 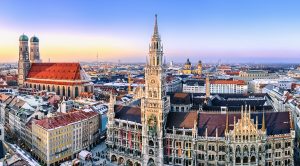 Munich is the capital of Bavaria and Germany’s third largest city. Located on the river Isar, Munich is famous for its beautiful architecture, fine culture, and the annual Oktoberfest beer festival. Munich’s cultural scene is second to none in Germany, with the museums even considered by some to outrank Berlin in quality.

Munich is a major international centre of business, engineering and research exemplified by the presence of two research universities. Furthermore there are several multinational companies, world class technology and science museums like the Deutsches Museum and BMW World located here. Munich’s economic strength is founded on its diverse economic structure, the wide range of growing industries and the successful composition of global players. Its central location in Europe makes it a hub of business activity and an attractive location for multinational organisations.

Munich is famous for its breweries and the Weissbier (wheat beer) is a speciality from Bavaria, however Helles (lager) is the most popular Munich beer today. There are around 20 major beer gardens, with four of the most famous and popular being located in the Englischer Garten and the largest one in the Hirschgarten. The Hofbräuhaus is one of the oldest breweries in Munich and a favourite amongst tourists. Munich has an excellent variety of restaurants ranging from traditional Bavarian, to Sushi and Italian. The nightlife in the city is thriving. Popular areas include Schwabing, which is a favourite amongst students and artists, around the Marienplatz in the centre of the city and Kultfabrik for clubs. Three weeks before Christmas, Munich comes to life with traditional Christmas markets, the most famous being the Christkindlmarkt at the Marienplatz.

With around 40 trade fairs for industrial goods, consumer goods and new technologies, Messe München (MM) is one of the world’s leading trade fair companies. Currently, MM organises more than thirty international leading trade fairs, including the largest trade fair in the world, bauma. Every year MM welcomes over 30,000 exhibitors and more than 2 million visitors to Munich. Beyond Germany’s borders, Messe München organises numerous trade fairs in China, India, Russia, South America, South Africa and Turkey. Many of these are well established and market-leading.

Your stay in Munich – useful links

Visiting Munich? Why not download the Munich City App!

View all trade fairs in Germany

FitnessConnected is more than a new leading trade show. Part of the ISPO network, it is a holistic B2B ecosystem…

The iba.CONNECTING EXPERTS success story continues The knowledge and networking platform of the global baking industry goes into its second…